How An Unexpected Question Flipped a Decision-Maker to Say “Yes” 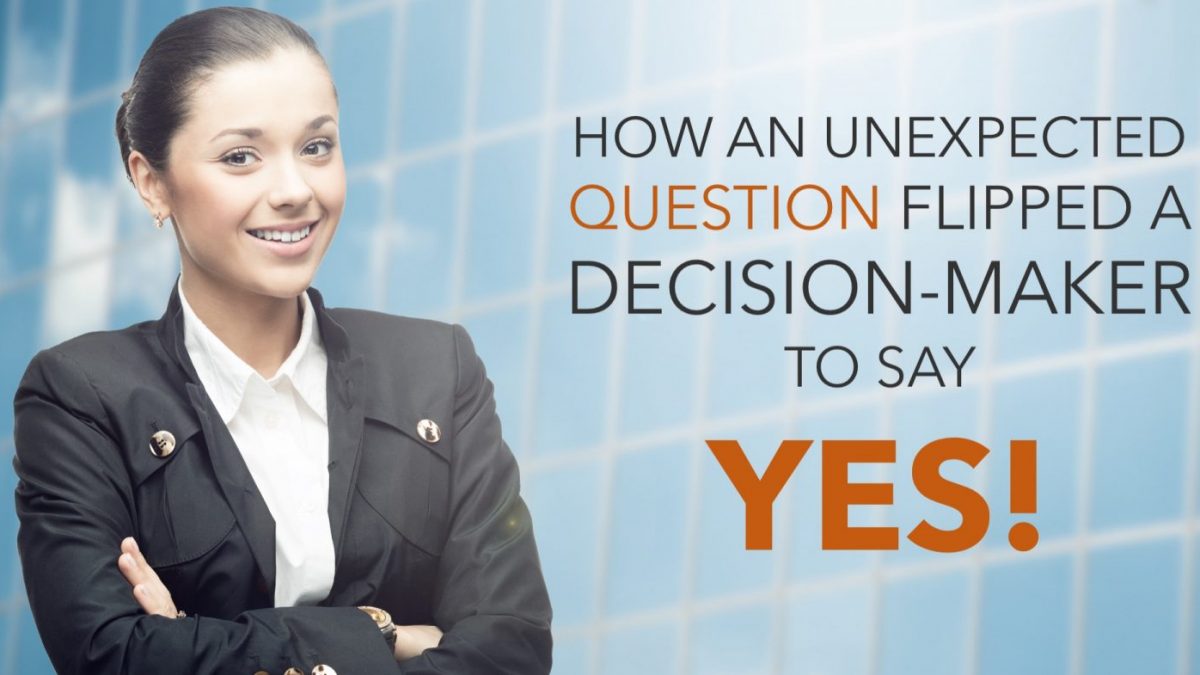 Knowing the difference between being liked and being trusted can transform your sales career. With just one question, here’s a story of how it instantly transformed an executive’s opinion of a sales rep.

Working across the country, Jim had successfully implemented his company’s products and services in 6 of the 10 territories for a Fortune 1000 company. Somehow, though, he had a feeling that the next territory was going to be a challenge.

When he first arrived at the office, everyone seemed to be nervously awaiting Diane’s arrival – the Regional Vice President. When she arrived, it was easy to see why. After several years in her position, Diane had surrounded herself with sycophants—what used to be called “yes men.” Everyone—young and old, men and women—agreed wholeheartedly with anything she said – no questions asked.

That told Jim that her management team was reactive, and that was going to be problem. The new process emphasized proactivity. Unfortunately, everything about his interactions with the team led him to believe that they were anything but proactive. They were obviously riding a strong brand reputation to overcome serious gaps on their team.

The Presentation
Armed with these observations, Jim introduced himself and his company, and then began presenting the new process to Diane and her team of managers. When Diane made a statement, everyone quickly nodded in agreement. When she answered a question, all seemed awed by her wisdom. That’s when she had anything to say at all. Most of the time, she acted disengaged, her eyes on her smartphone or the small pile of paperwork in front of her.

Finally, Jim wrapped up his presentation. All heads turned to the vice president. Without looking up, she asked, “How do I know this is going to work?”

There were plenty of answers Jim could have provided. He could have pointed to increased sales in other territories, anecdotal evidence, statistics, or simply made promises in hopes that she would buy into it. He could have attempted to say something to get her to like him. He didn’t.

Jim knew that the new process wouldn’t work, unless Diane truly engaged with it. He needed a way to make that happen, so he politely answered her question with a question of his own:

“Are you going to do what I tell you?”

Uh-Oh
Diane quickly looked up at Jim from her paperwork – stunned. No one in her office had ever spoken to her that way. Her opinion of him changed instantly – and for the better. Surprisingly, she admired Jim’s polite, yet confident response. She didn’t have anyone on her team to challenge her, so this was actually refreshing.

This one question was the turning point in their relationship and she bought.

From then on, Diane and Jim had a strong rapport. She was fully engaged, even to the point of eliminating a couple of people on her senior staff who could not or would not adjust to the new process and who refused to own problems and performance gaps.

The Lesson
If Jim had answered Diane in a way calculated to make himself appear likable, the territory would never have become as successful as it ultimately did. Instead, he positioned himself as credible by stating that if her team followed his direction, they would see the difference in their results. Jim avoided the trap into which so many people—and not just salespeople—fall.

He didn’t care if Diane liked him, as long as she trusted him.

His question put the ownership for results of the project back where it belonged—squarely on the shoulders of the Regional Vice President. I’ll give you the tools, he said, but you have to do the work.

In the end, Diane’s territory implemented Jim’s process successfully and saw the results he had predicted. Everyone involved benefitted— Diane, her regional team, her customers—and, of course, Jim and his company. And all because Jim had enough self-confidence not to worry about being liked… just so long as he was trusted.