Why Bad Salespeople Get Hired 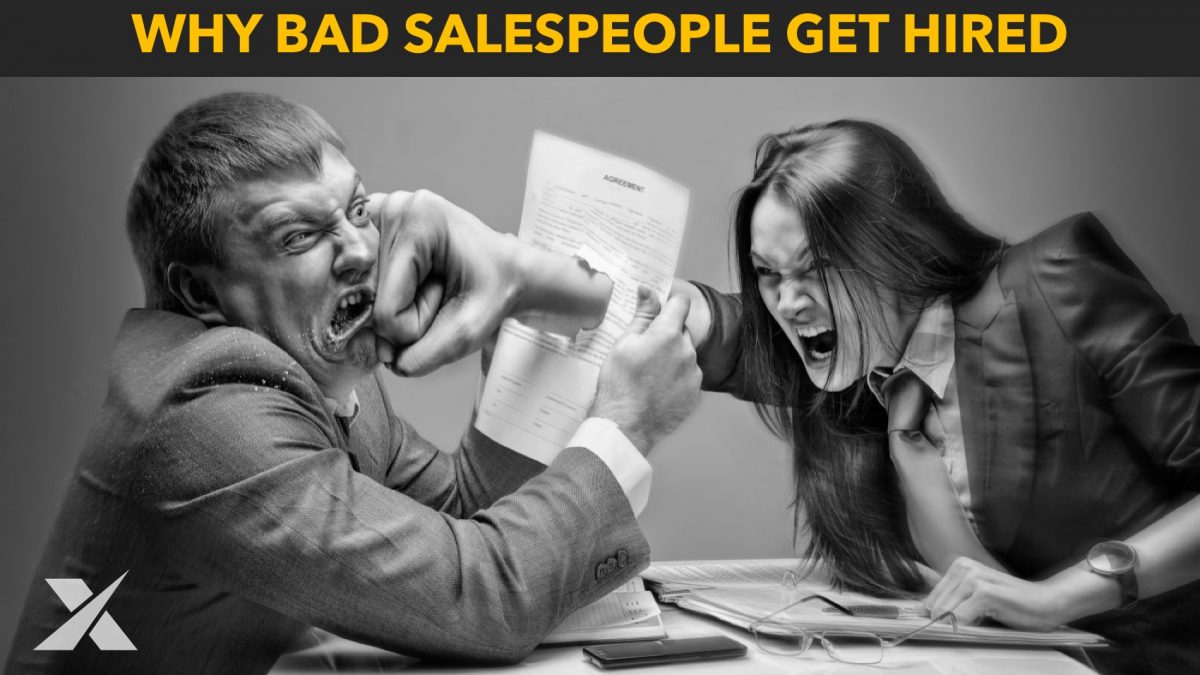 Bad salespeople get hired everyday. They can devastate a sales team and a company’s reputation. Recently, a friend told me over lunch about a sales rep he hired the previous year. This sales rep sold seven times the industry average of $1million at his previous company. At $7million in sales, he was a superstar. My friend (the CEO) and one of his Sales Managers snatched this sales rep up with great expectation.

After several months of ramp up they quickly noticed that he was not selling… anything. Confused, they investigated the marketplace, competitive landscape, economic conditions, product pricing, etc. Nothing appeared to be out of the ordinary. Their other sales reps were doing well, but he wasn’t. The sales rep failed to build a pipeline with which to set appointments and develop sales opportunities. This salesperson didn’t just fail to meet his sales quota, he sold absolutely nothing! He sold $0.00… the entire year!  The bad salespeople syndrome severly inflicted my friend.

An in-depth sales assessment can weed out bad salespeople

I asked for his sales rep to take our xPlore Sales Assessment to assess his sales personality, sales motivation and sales mentality. I knew if I could identify the source of the problem I could offer a solution. My desperate friend agreed to have his sales rep take the assessment. After reviewing the results, I asked my friend one simple question:

My friend stared at me with a blank look on his face. After a few moments of silence, he admitted that he never drilled down into the details of his sales rep’s previous sales success. During the hiring process, he assumed that the sales rep amassed all of those sales and new customers on his own. (Later on, my friend found out that this sales rep inherited a large customer base from the previous sales rep who was promoted to a Sales Director position in another division of the company.)

Make sure that every new sales candidate aligns with the job.

The results of our sales assessment clearly showed that my friend hired a Farmer instead of a Hunter. The assessment results revealed that this salesperson would never, ever prospect for new business. He was (and always would be) a cultivator of existing accounts based on pre-existing relationships. In essence, he was a warm-call sales rep.

My friend just shook his head in dismay. He lost $180,000 in salary. The lost sales over the previous 12 months were incalcuable.

Bad salespeople come in many forms. The lesson here is clear: every sales candidate possesses a specific set of capacities. As a result, some salespeople align better with certain sales jobs. Others do not. Within the realm of professional selling there are many different types of jobs and they are not all the same. Therefore, you must ensure that your sales candidate has the capacities and motivations that align with what the job requires. It’s all about job fit. Otherwise, you end up like my friend.

Only a sophisticated sales assessment unmasks these hidden attributes of bad salespeople and provide you with the intelligence you need to make a well-informed hiring decision – no matter how well the candidate interviewed or the level of experience on their résumé.

Here are a few more reasons why bad salespeople get hired:

1. Personality conflict with the role

Your sales candidate has a personality style that conflicts with what the sales role requires. You need a hunter with a dominant Type-A personality, but your sales rep is a relational compliant personality type. As a result, the probability of success goes down. Even though your candidate has some extroversion, they lack the decisiveness and assertiveness that the role requires. Therefore, the chances of them meeting your expectations diminishes.

This does not mean that your sales candidate has no motivation. It means that what they’re motivated by does not align with what your job rewards. For example, your candidate may be motivated by making money. However, if you have a salary plus commission role, your sales rep may not have a strong enough money motivation. They may become satisfied with the salary and fail to prospect for new business. Therefore, they appear to be unmotivated. What they really are is content.

In other cases, you may have a sales candidate with a low drive for autonomy. As a result, they need a sales manager close to them. But if your job requires them out in the field, working from home or working in a satellite office, they will probably fail. Why? They cannot self-manage on their own. Again, they may interview well, but below the surface their motivators don’t align with your job.

This is a cognitive issue. In other words, it’s a mindset or belief issue. In this case, your sales candidate overvalues relationships with others. Why is this a problem? They tend to avoid conflict and they seek validation from others. This leads to fearing rejection, objections and negotiation. As a result, they shy away from tough conversations, avoid conflict, and rarely hold the line on price.They drift towards warm calls and referrals only and avoid prospecting.

4. They are an institutionalized sales rep

Your sales candidate comes from a large company with plenty of resources. If you manage a sales team in a smaller company, you may not be able to offer those things: strong branding, marketing support, sales support, comprehensive CRM system, solid sales training, onboarding programs, etc. As a result, you have to rely more on the talent of the individual. Fundamentally, they are a mediocre sales rep. But they sold well working for a large company. Unfortunately, they cannot repeat that success without those resources. When they arrive at your smaller company (without all the goodies), they fail. Be careful to ask questions about the resources and support from their previous company. They may not be able to bridge the gap if they come to work for you.

5. The titles are the same but the roles are different

They may come from the same industry and be in the same job. However, the roles between the two companies are very different. For example, your sales role may require the sales rep to hunt and farm. In other words, they have to acquire the customers and the service the accounts. Working in their previous job, they may have only had to sell new accounts and then turn it over to an Account Manager. In other cases, they may have had strong marketing support that generated warm leads for them. If you expect them to cold call, they may not be able to handle that task each week. Again, they will most likely fail to meet your expectations.